Axios reports House liberals in Trump-won districts are getting cold feet on using reconciliation to push a second infrastructure bill loaded with trillions in progressive priorities and tax increases – but only after facing more than a million dollars in advertising from American Action Network in their districts.

For weeks, AAN has blanketed the airwaves warning of the consequences that Pelosi’s tax increases would bear for families and small businesses, and only now are House members finding the courage to speak up. 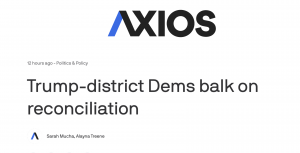 Question is: with Pelosi pledging to pass nothing if it doesn’t include massive tax increases, will these Members turn their rhetoric into actual votes against it or will Pelosi make them walk the plank anyway?

“House liberals are only having second thoughts after AAN blanked their districts for weeks urging them to do the right thing,” said AAN Communications Director Calvin Moore. “Enormous new tax hikes and trillions in new spending will only make it harder for families and small businesses to recover and it’s a shame it took the fear of TV ads to get them to speak out about it.”