New Survey Research: Left’s Lurch To Socialism Is Unpopular Across The Country

The survey finds both that Americans recognize and overwhelmingly oppose the liberal shift toward socialist policies. Yet in order to fully persuade the public, it is crucial that conservatives explain what the left’s socialist policies are and the consequences these ideas would have on their lives.

“Folks across America are seeing the left embrace increasingly extreme ideas, and recognize that this is socialism, pure and simple,” said American Action Network President Dan Conston. “In order to build support for conservative solutions, it’s crucial that we explain what these socialist policies are and the tremendous negative impact they would have on Americans’ lives. We must win the battle of ideas in Congress, and we do it by making it clear how the left’s socialist ideas will specifically and personally affect American families from coast to coast.” 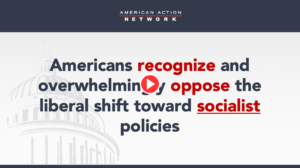