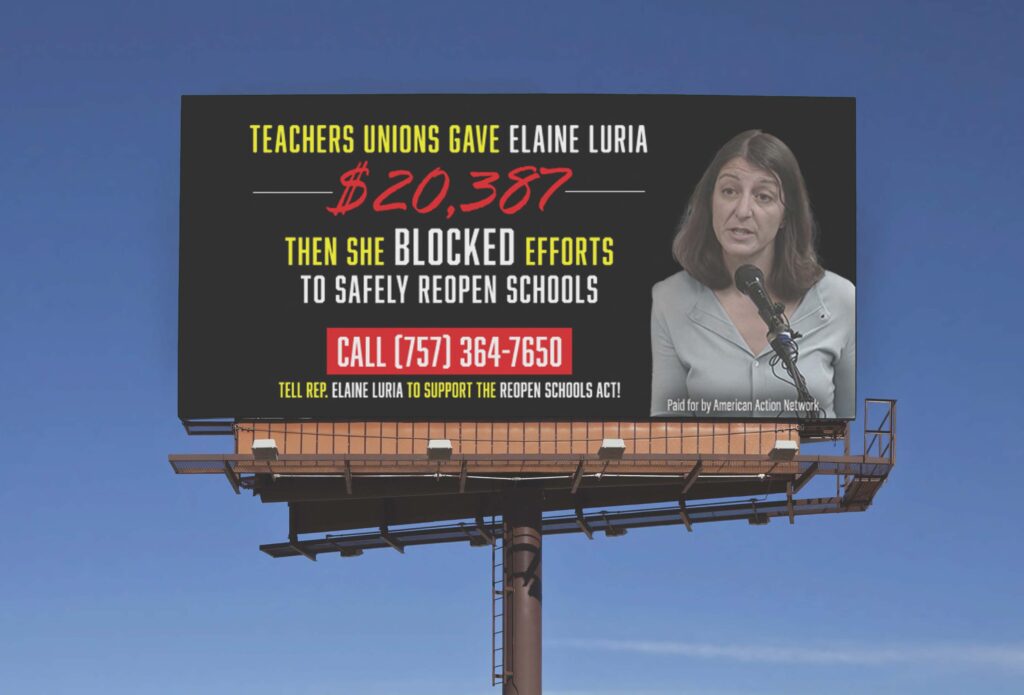 What They Are Saying: AAN’s School Campaign Puts “Congressional Democrats In A Difficult Spot”

Check out the details here and see what they are saying about AAN’s campaign below:

Fox News: “The American Action Network (AAN) on Thursday is unveiling a new issue advocacy campaign that urges congressional lawmakers to support the safe reopening of the nation’s schools. The ads, shared first with Fox News, will be seen in House districts with Democrats … who voted in recent weeks against the Reopen Schools Act. Congressional Republicans in recent weeks have highlighted the tug of war over the reopening of schools, which has put President Biden’s administration and congressional Democrats in a difficult spot between the competing interests of some teachers unions in major cities, which oppose returning to classrooms without more protections, and parents who desperately want to see their children back in schools.” (Paul Steinhauser, Fox News, February 11, 2021)

“reopening schools has already become a top line of attack”

USA Today: “Reopening schools has already become a top line of attack. … ‘Why hasn’t Abigail Spanberger spoken out against Biden’s broken promise?’’ NRCC spokeswoman Camille Gallo asked in a news release Wednesday about Spanberger, a Virginia Democrat. Spanberger is one of 12 Democrats targeted in an ad campaign on the issue announced Thursday by the American Action Network, a conservative advocacy group aligned with the GOP. ” (Joey Garrison and Maureen Groppe, USA Today, February 12, 2021)

“seeking to tap into that political energy”

Roll Call: “Still, as more parents hit a breaking point, and as teachers’ unions signal that school may not return to normal even in the fall, parents across party lines have mobilized to pressure their districts to reopen. And Republicans are seeking to tap into that political energy… The American Action Network… launched a new campaign Thursday targeting a dozen Democrats with billboards, digital ads and phone calls, urging them to support students’ return to the classroom.” (Kate Ackley, Roll Call, February 12, 2021)

“using the issue to soften the ground”

NBC News: “The midterm elections are almost two years away, but Republicans are already using the issue to soften the ground in … New York, California, Illinois, New Jersey and Virginia, where Democratic leaders have clashed amongst themselves and with unions over reopenings. The American Action Network, a deep-pocketed conservative group, began putting up billboards and launching digital ads and robocalls last week in a dozen congressional districts represented by vulnerable Democrats. The ads highlight how much money each member received in campaign contributions from teachers unions and calls on them to back a House GOP bill to provide full federal funding only to schools open for in-person learning.” (Alex Seitz-Wald and Allan Smith, NBC News, February 16, 2021)

Morning Call: “Some political groups are already taking aim at the Cartwright and Wild. The American Action Network, a conservative non-profit group, planned to unveil new billboards Thursday targeting the two for their opposition to the the Reopen Schools Act. The bill would have provided funding for school districts that fully reopened during the pandemic and penalized ones that continued to virtual learning. The Allentown School District, the largest district in Wild’s district, has gone fully virtual and could have been hurt by the proposal.” (Tom Shortell, Morning Call, February 11, 2021)

NJ Globe: “The American Action Network has purchased a billboard on I-295 in Burlington County alleging that schools in New Jersey’s 3rd district remain closed because Democrats are putting the teachers union ahead of kids.  The message asks parents to contact [Congressman Andy] Kim and ask him to vote for the Reopen Schools Act.” (David Wildstein, NJ Globe, February 11, 2021)

“a thorny political challenge thanks to its visceral toll on
families”

POLITICO: “White House aides and close allies acknowledge that getting kids back into classrooms is a thorny political challenge thanks to its visceral toll on families. But they insist they’re following the advice of scientists and health experts to keep children safe. They have framed their approach as part of a comprehensive, emergency effort to address several interrelated problems with necessary funding.” (Natasha Korecki and Christopher Cadelago, POLITICO, February 16, 2021)

POLITICO Morning Score: “American Action Network, the House GOP’s counterpart, is up with a new campaign that targets a dozen Democratic members over reopening schools. The ad buy is similarly small, an AAN spokesperson described it as “mid five figures” to Score. Three members are getting a billboard in their district, along with digital ads and phone calls — Elaine Luria (Va.), Susan Wild(Pa.) and Kim — and the rest are just getting the digital ads and calls.. it is a sign for what could be going into Republican ads this cycle.” (Zach Montellaro, POLITICO Morning Score, 2/12/21)

Roll Call: “Speaking of schools, the Republican outside group American Action Network unleashed a new campaign Thursday targeting a dozen Democrats with billboards, digital ads and phone calls, urging them to support students’ return to the classroom. All of the Democrats are also on the NRCC’s target list, except one: House Education and Labor Chairman Robert C. Scott of Virginia. The other 11 include Reps. Josh Harder of California, Chris Pappas of New Hampshire, Andy Kim of New Jersey and Abigail Spanberger of Virginia.” (Bridget Bowman, Stephanie Akin, and Kate Ackley, Roll Call, February 11, 2021)